Welcome to the Halloween series of Camino Comfort’s blog in which we’ll be sharing some urban legends as passed on by my Galician ancestors. Today I’ll be sharing with you the legend around La Santa Compaña.

La Santa Compaña is an ancient legend that is still occasionally being told in the traditional Galician culture. Through the ages, it left its mark, they say, in the ancient ‘Cruceiros’ – the stone crosses one still finds in certain cross ways. They have been put there for protection. You have seen them while walking the Camino to Santiago, for sure!

La Santa Compaña is a procession of lost souls. At night, after 12, they roam the streets of villages. During this event, they visit every household that soon will be burdened with the death of a family member. There are a lot of variations of this ancient story, but witnesses say that the lost souls are usually dressed in long, black robes with a hood. They walk barefooted, in two rows, covered in shrouds. Every soul carries a lit candle and when passing they leave behind a very strong and unpleasant scent of wax. Some have witnessed the air becoming suddenly very cold and the sounds of chains sounding through the mist.

The procession is headed by a mortal, who carries a cross and a bucket of holy water. This mortal does not remember anything of the event the next day. Stories tell that one can recognize these poor mortal slaves of the Santa Compaña, as they get more sick, weak and pale because of the deprivation of sleep they have to endure each night. Doomed to carry the cross every night for the Santa Compaña, until they die or…find the next unfortunate witness of the procession. If a new witness is encountered, the cross is passed on.

The procession continues its way, whispering prayers, chanting funeral hymns or psalms and ringing a small hand bell. Some witnesses have heard them chant ‘Walk during the day, because the night is mine’. They say that the upcoming appearance of La Santa Compaña is announced by the dogs in the village, who start to howl excessively.

Not every mortal can see the Compaña. There have been reports that explain how only certain gifted people have that ability: these are persons who have been baptized as a child with the wrong oil. In these cases the priest mistakenly used the oil for the Sacrament of the Sick instead of the one for the Sacrament of Baptism. As adults, these children acquire the ability to see the appearance of the Santa Compaña. People who do not have this ability can still sense the appearance though.

If you encounter The Santa Compaña and you want to avoid the burden of being forced to carry on the cross, the legend comes with its own valuable escape solutions. I recommend to use more than one of them. Keep them in mind when you are roaming in the dark trying to get to the next albergue in time! For all those pilgrims that start at 4 or 5 am it is a valid warning: walk during the day because the night is theirs…

Truth or Fantasy; want to take the risk?

Is it still a legend when the eyewitnesses are your own ancestors? I’m talking just 1 generation back here.

My mother had an uncle who was ‘gifted’. A lot of the scary stories that were passed on by my mother concerned this uncle. His name was Daniel.

Daniel and two of his nephews,  (so we are talking here about two of my uncles) went out one evening to have some drinks. When they returned, riding their bikes through the fields, something happened. Uncle Daniel suddenly stopped and ordered his nephews to stop. One of them said ‘Oh lord, Daniel, what have you seen this time!?’ Uncle Daniel broke into a feverish sweat and ordered his nephews: “Stand still, grab the handlebars of your bike very tight, be quiet and close your eyes. Whatever happens, do not lose your grip and do not open your hands for anything”.
A foul scent of candles filled the air and the nephews were scared to death but kept hanging on to their handlebars.

After a couple of minutes, everything returned to normal and uncle Daniel and my uncles continued their way  home.

I don’t really believe in these stories, but they sure are interesting and with Halloween coming up the chances that La Santa Compaña will cross pathways with you is maybe slightly higher.
You never know, do you?

Join our blog to read my next story about uncle Daniel. One that’s about a real Galician witch, how she terrorized my grandmother and what uncle Daniel did about it!

You can subscribe to our blog with the form on the right sidebar. Enjoy and ‘Buen Halloween Camino’ to all pilgrims out there!

PrevPrevious PostBeware The Camino on Halloween!
Next PostWitches of Galicia: I don’t believe, but they do exist…Next 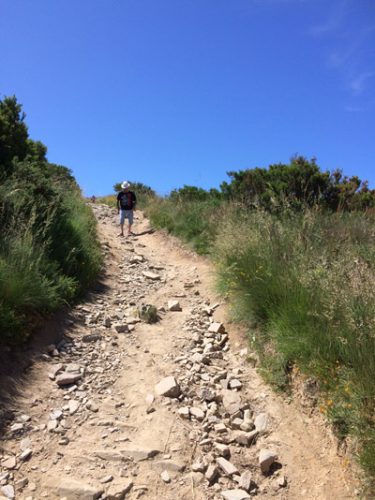